I confess that I was somewhat of an oddity as a child. There are some who might argue that I’ve retained this quality into my adulthood. When I was about eight years old, my family was part of Brethren church plant in Grand Rapids. Actually, my father is the one who initiated the plant and functioned as a sort of “lead elder” for this church during that time. There was not an abundance of Spanish- language ministries in Grand Rapids when my family moved to the city in the early 90’s. And so, an inner-city, Spanish-language dominant, Brethren church was conceived and brought forth in the southwest side of the city, where a growing population of Latino immigrants had begun to take hold.

When this novel church received its first convert, he was promptly properly seasoned and made ready for baptism by immersion. We were still doing home meetings for worship at the time. Having no baptismal in the living room an announcement was made. This Sunday we’re having a special evening service across the street around the neighbor’s pool. I realized then that I had never been baptized. After the folding chairs were put away, I went up to speak to the elders, including my father, who were in a sort of huddle. I asked them, “What prevents me from being baptized?” They chuckled and someone asked me if I even knew what baptism meant. They instantly became solemn when I replied by with a paraphrase quote of Romans 6:3-5.

“…don’t you know that all of us who were baptized into Christ Jesus were baptized into his death? We were therefore buried with him through baptism into death in order that, just as Christ was raised from the dead through the glory of the Father, we too may live a new life.

For the life of me, I can’t ever remember memorizing that passage of Scripture and the look on my Father’s face suggested that he didn’t remember me doing so either. There were no further questions.

I was baptized in the neighbor’s in-ground swimming pool along with the other candidate. That anyone in that neighborhood had a real swimming pool was just as much an anomaly as the sight of church folks in their dress clothes gathered around the pool while singing hymns in Spanish. The sun set the sky on fire in its twilight. I don’t know if God troubled the waters as it says in the old-time Spiritual. But, I do remember that the water was cold. Ironically, I also recall being asked to share a testimony while standing there in that freezing water. I didn’t have anything to say. After a few moments of silence, they dunked me anyway.

The scene must have set some sort of precedence. Every other baptism in the church had its unusual elements. A narrow horse trough was used for several other baptisms. There were rivers chosen in nearby public parks, and I vaguely remember someone getting tossed into lake Michigan. I’m sure that if it ever came to it, the church might have been willing to take someone into the backyard and hose them down in the name of the Trinity, but thankfully the elders were fairly resourceful and found other means to perform the sacrament. One thing for sure is, the new church plant was determined to make disciples of every Latino-immigrant nation represented in the ‘hood. It was determined to let everyone in its vicinity know that Jesus Christ is the Savior of the world. I was more than glad to participate. This was only my introduction to God’s mission to the world. The Holy Spirit would stir a passion for God’s Word and missional engagement in me that was deeper still. 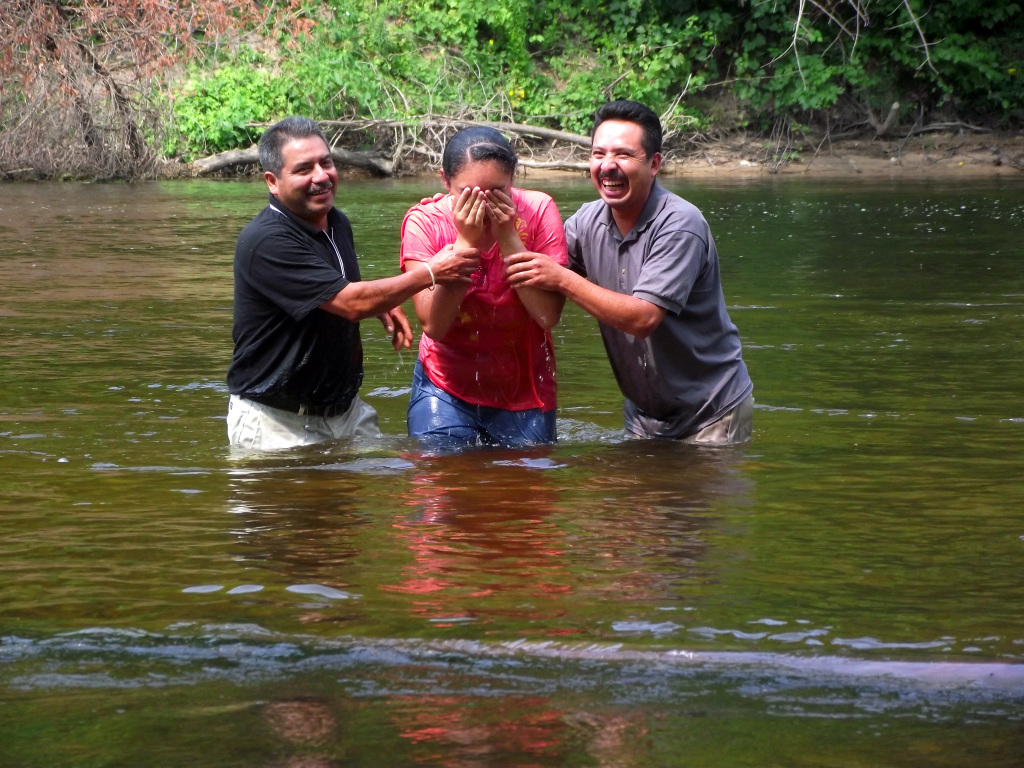 Sometime later, my family moved across Division Avenue to the southeast side of Grand Rapids. We then lived in the proximity of Garfield Park. I loved playing basketball and I was allowed to go the park on my own to shoot hoops in the afternoons. I began sneaking to the park with my Bible smashed into my pocket or hidden beneath my shirt. I’m not sure if my mother ever noticed, and now that I look back I’ve never asked her if she did or didn’t know what the square looking thing was under my shirt. I would walk past the basketball court to the west end of the park where there were several tall trees. Then, I pulled out my Bible and instructed the trees to, “Hear now, the Word of the Lord.” I took it upon myself to exhort those trees boldly with the words of Psalm 96: “Let the fields be jubilant, and everything in them; let all the trees of the forest sing for joy. Let all creation rejoice before the Lord, for he comes to judge the earth…” I found several other Scriptures related to their context and situation to use as sermon material. I conducted whole worship services in that park and did all, but collect an offering. This was more than just modeling what I saw on Sunday mornings. I didn’t fully comprehend it at that time, but God was forming my heart for the preaching of the Word.

Romans 8:28-29  “And we know that in all things God works for the good of those who love him, who have been called according to his purpose. 29 For those God foreknew he also predestined to be conformed to the image of his Son, that he might be the firstborn among many brothers and sisters.”

We are all moved toward God in strange and marvelous ways.

What are the unique story elements of how God reached you?

How is God calling you to live a new life?